Afterward, once we have checked all those fans for their weight, airflow, dimensions, turning on/off mechanism, and durability, we were able to select the 11 best window fans for everybody.

Among those 11 fans, the Xpelair GXC9 commercial window fan is undoubtedly the best.

It is powerful, simple to install and can rotate in both ways to pull in outside air as well as dispel stale air from the room.

However, if you were looking for an affordable option, consider the Vent-A-Matic 162mm Cord Operated Fan.

Despite coming at a below-average price, this fan comes with a wind guard.

Its installation is also straightforward and the airflow of this model is adequate for large-size rooms.

Xpelair GXC9 Commercial Window Fan
For over forty years the Xpelair GX series has remained the specifiers’ classic solution to domestic ventilation applications. Today’s 5th generation of GX units remains in tune with the times. They retain their hallmark rugged reliability and styling, and the range has been expanded to include innovations for a range of specialist tasks.
Check Price on Amazon

However, we didn’t like its switch. It is not very durable and looks like it could break down quite easily.

Also, this fan isn’t closed at the back, which allows the wind to blow in when the fan isn’t running.

The Xpelair GCX6 is a well-designed fan which is pleasant to look and could efficiently suck in a significant amount of air from the outside.

It is also simple to operate. Its noise level of 37db is quieter than a library. 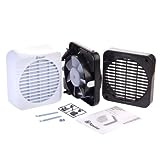 There were some drawbacks to this model, however. Unlike the Xpelair GXC9, GXC6 is not the simplest to install so we ended up spending a considerable amount of time putting it in place.

We also didn’t like the fact that the flaps would prevent the fan from switching on.

The design of the Comfort Zone Cz310R features twin fans which are very powerful and provide huge amount of airflow when working together.

It also has a remote control which allows to increase/decrease its speed, changes the rotation of the fan, and also regulate its power. 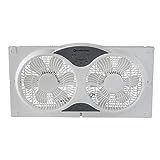 The main issue we noticed with the fan was with its noise.

For, it is not the quietest fan. It is also quite large and does need a big window.

The size also means that its assembly will take some time.

This configuration makes it very efficient in regulating the air inside the room. 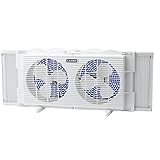 Also, its airflow is powerful enough to fill a large-sized room with air. Unlike the comfort zone, it runs quietly as well.

However, we didn’t like its build as this model isn’t very sturdy.

Its large size means that you have to install it vertically, which means it may not work for small windows.

Also, cleaning the fan isn’t easy due to its large size.

The Manrose kitchen extractor fan is very simple to install and will only take you a few minutes.

It is quite powerful and effectively draws out air from the room.

Operating this window fan was also very simple and due to its small size, installing it was the same.

The main drawback was the fact that unlike the Lasko 7-inch twin fan, this one is quite noisy.

Also, the wind does blow into the house through the back of the fan when its not running.

The Manrose is a pull-cord operated fan which has an automatic backdraught shutter which opens/closes when the fan is powered on.

Its relatively small size means you can mount it on the wall as well as on the window.

It produces 62 liters of air per second and requires a 184mm glass cut window for installation.

However, we did notice that the slats take a long time to open when the equipment is running.

Also, the tininess of the fitting screws might concern you about how secure they are.

Unlike the Vent-A-Matic 162mm, this one comes with a wind guard to prevent things from getting through the fan and into the house.

Also, while its body is plastic, the fan is aesthetically pleasing.

It comes with a diffusing rotor which keeps draught at bay and provides fresh air circulation.

Also, even when the outside air pressure is equal to that of its blades, the Vent-A-Matic would still run thanks to the inertia of its rotor.

However, we did not like how noisy it got especially during high winds and the instruction manual wasn’t very clear on how to install the fan.

The Greenwood Airvac is a well-designed machine which is easy to install.

It comes with a timer using which you could pre-program the running time of this model. 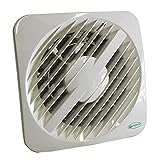 And its size versatility makes sure that whether you mount it on the wall or on the ceiling, it would provide equally good ventilation.

On the downside, the Greenwood Airvac does make a bit of noise.

The Airvent 435103 features a pull-cord for operating the fan. It has a thermally activated shutter which opens in a short time when you run the fan. 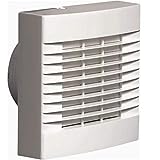 Also, its manufacturer recommends that you use this model either in kitchens or in large-sized rooms.

However, we didn’t like the spacing between the vents which isn’t small by any stretch of the imagination.

The Airvent was also quite noisy and its construction seemed a bit flimsy.

The Xpelair DX100 is a very compact window fan which is ideal for use in bathrooms and toilets.

Unlike the Manrose Primeland which had short screws, the screws on this model are quite large and provide a secure fit.

Also, it operates without making too much noise. 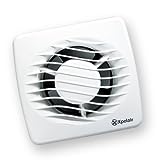 It comes in two versions – the first of which is the standard version whereas the other contains a timer.

More importantly, it IPX5 rating means you can use this fan in humid conditions as well.

On the downside, it is not the easiest to install and you have to carefully go through the manual for the same.

We also did not like the timing mechanism as it was susceptible to damage.

This cord operated fan is recommended by its manufacturer to be used in kitchens, bathrooms, and average-sized rooms.

It is provided with a diffusing rotor which keeps draught at bay and allows fresh air circulation.

On the downside, it is not the most silent window fan.

It tends to squeak when the blades are rotating.

We also didn’t like the quality of the plastic as it seemed light and easy to break.

What is a Window Fan?

It is a fan that is especially designed to be placed on the frame of the window.

The main function of window fans is to regulate temperatures inside the house as well as improve ventilation.

What Are the Advantages and Disadvantages of Window Fans?

The main benefit of window fans is that they pull in fresh air into the house.

Also, they improve the air-circulation inside the home and help get rid of stale air.

Window fans also assist air conditioners to run more efficiently and consume less energy. They are also simple to install and maintain thanks to their simple design.

Since they mainly use industrial motors, window fans can be quite noisy.

Secondly, they do little to reduce the humidity.

This means that if you live in a humid environment, a window fan may not cool the house efficiently.

Window fan princes range varies from as little as £10 to well over £150 for some commercial models.

What Should I Look for When Choosing a Window Fan?

The first thing to consider is the size of the window fan.

You want to go for one that fits perfectly on the frame of your window otherwise it will not serve its function well.

An example is a screen which prevents insects from getting into the house.

This also stops burglars from also using the window fan as access to your house.

The power of the window fan is important.

A powerful equipment will help pull in large amounts of air as well as get rid of the stale air more efficiently.

It’s always a good idea to get a window fan that comes with extra features such as dual directional fitting, speed settings, multiple blades and remote control.

What’s the Best Fan for Windows? Why Is It the Best?

The Manrose Primeline PEF6130 is the best fan for windows.

It is quite powerful and able to draw in 62 liters each second.

You can also mount it both on the window as well as on the wall.

What’s the Best Reversible Window Fan? Why Is It the Best?

It comes with a remote control that lets you dictate the power, speed, and direction of the fan.

Can Window Fans be Mounted Vertically?

Window fans can be mounted vertically provided there is enough space on the window frame.

Otherwise, you’d have no choice but to mount them horizontally.

What’s the Best Window Fan for a Casement Window?

The Xpelair GXC6 is the best window fan for a casement window.

It is simple to mount and powerful enough to efficiently draw in large amounts of cool air from the outside.

Which Way Do You Put a Fan in the Window?

If it’s the former, then the fan should face the window.

If you want to pull in cool air, then the fan should face the inside of the house.

Keep in mind that some window fans can rotate in both directions.

What’s the Best High Velocity Fan? Why Is It the Best?

It features a powerful high-speed motor with 3 speed settings, has an adjustable tilt head and a stylish chrome finish.

What’s the Best Fan for the Kitchen? Why Is It the Best?

The Manrose kitchen window extractor fan is the best fan for the Kitchen.

It is able to draw out 64 liters of air per second.

It is also very simple to install and has a compact build.

What’s the Most Effective Window Fan? Why Is It the Best?

The Lasko 7-inch twin window fan is the most effective window fan.

It comes with two fans which allow it to draw in a lot of air.

It is also very powerful and operates quietly.