Which wireless hard drive has the best storage for the money?

We can now say with certainty that the Apple Time Capsule ME182B/A is the best wireless hard drive on the market.

Not only it doubles as a Wi-Fi router, but the Apple Time Capsule uses 802.11ac Wi-Fi and beamforming technology to provide breathtaking Wi-Fi speeds. Also, it provides 3 TB storage space and offers 3 Gigabit Ethernet ports, using which you can physically connect the drive to your PC if you don’t want to do the same wirelessly.

The WD My Passport Wireless Pro allows you to connect to up to eight devices at once. Furthermore, it shows up as a Wi-Fi access point for your tablet, laptop, smartphone, smart TV, or Wi-Fi camera. The files on the drive are also accessible through the My Cloud app for both iOS and Android. 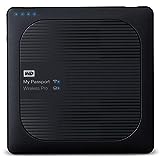 Also, if you want to connect physically, it has a USB 3.0 port. It also has an SD card slot and provides 20 hours of standby time on full charge. However, if you are streaming videos, it would last up to 6 hours. It provides 2TB storage space.

Apart from connecting to up to seven devices at once, the Seagate 1TB can stream music and movies to 3 different devices. It provides 10 hours of battery life and is compatible with Android iOS, Kindle Fire, and Windows.

It also gives you the option to sync your Google drive and Dropbox folders, following which you can access them offline. You can use the Seagate Media app to navigate through your media on this device. Also on offer is a USB 3.0 port.

One of the most inexpensive devices in this review, the Asus Travelair contains an SD card slot, a USB 3.0 port, and LED power indicators. It comes with a mains charge adaptor, USB cable, and user guide. Also, while it does have a built-in Wi-Fi network, the Travelair supports NFC for one-touch transfers with compatible devices. 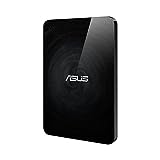 You can take advantage of the Asus AiDrive app to manage, browse, stream, and share files on this device with your iPhone, Android, Kindle Fire, or iPad device. It also supports other devices including tablets and smart TVs. As for its battery timing, you need to charge this device for eight hours before first use.

The Lenovo Thinkpad Stack is a combination of four modules including; a 1TB USB hard drive, a Wi-Fi access point, a power bank, and a Bluetooth speaker. While all these modules can work in tandem with each other, you can use each of them separately as well. Each device comes with logos to let you know which one is which.

Apart from having a micro-USB port, you’ll also find two USB charging ports on this model. The hard drive, meanwhile, has a micro-USB 3.0 connector for physical connections. And to configure the whole unit, a ThinkPad Stack Assistant App accompanies the product.

The WD My Passport Wireless comes with a built-in SD card reader which also has a one-touch copy button. Its battery provides 10 hours of playback and a whole day of standby time. Also included is a built-in power bank to charge your devices. 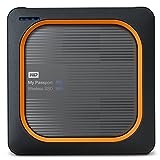 Accompanying this SSD drive is the My Cloud App using which you can stream music and videos from it. Then there are two USB ports; of which the USB 3.0 port is for transferring files to and from the device. Also, its built-in SSD can withstand drops of up to 1 meter.

The San Disk Connect 128 GB Wireless Stick is a storage option for phones, tablets, and computers. It can stream HD movies and allow up to three devices to stream music at the same time. And if you don’t want to use its built-in Wi-Fi, you can simply plug it into your device’s USB port.

Also, apart from relying on 802.11n Wi-Fi for connection, it can store up to 7,200 photos and 8,000 songs. It is compatible with iOS, Android, Windows, Kindle Fire, and Mac operating systems.

The Corsair Voyager Air provides three connectivity options: Gigabit Ethernet port, Wi-Fi, and USB 3.0 port. It provides storage space of up to 1TB and comes with a custom app for both Android and Apple iOS.

Moving on, it comes in two colors and provides a battery timing of up to 7 hours. At the same time, it can stream HD videos to up to 5 users simultaneously. Similar to the abovementioned Wireless plus, it supports the 802.11n Wi-Fi and works on the solo 2.4GHz frequency band.

The Apple Time Capsule provides a 2-in-1 combination of a wireless hard drive and Wi-Fi router. It automatically connects with Apple’s Time Machine software and is also available in a 3 TB model. Also included are 3 gigabit Ethernet ports.

Apart from relying on the latest 802.11AC Wi-Fi, it makes use of beamforming technology to provide faster Wi-Fi speeds. Furthermore, you can use it with both Apple, Mac, Windows, and Android devices.

Boasting storage space of 64 GB, the San Disk Connect provides up to 8 hours of streaming on a full charge. It can connect up to eight devices and stream five HD media streams at the same time. It also gives you the option to add more storage with its SDHC/SDXC card slot.

That said, the transfer speed of the SanDisk is on the slower side, partly because it has a USB 2.0 port.

What is a Wireless Hard Drive?

As a result, they are particularly useful for tablets and smartphones which don’t have simple USB ports.

Also, since they are standalone devices, wireless hard drives are battery powered, and they emit their own Wi-Fi network to which any compatible device can connect to store data.

Their battery timing depends on your usage pattern of the same, with some wireless hard drives offering as much as 20-hours on standby mode.

A wireless hard drive works by emitting its built-in Wi-Fi or Bluetooth signals. In that sense, it works as a Wi-Fi router or hotspot.

You can limit access to your wireless hard drive by providing its Wi-Fi with a password, which anyone wishing to connect to the drive would have to enter.

What are the Advantages and Disadvantages of Wireless Hard Drives?

How to connect Wireless Hard Drive to computer?

While every wireless hard drive has a different procedure, we’re going to provide you with a general one.

What is the difference between SSD and HDD?

Solid-state drives (SSD) and hard disk drives (HDD) are two of the main storage solutions available to consumers. While both of them have their own benefits and shortcomings, one of them – the SSD – is a clear winner.

That is, because, SSDs have a tiny size, are rugged, and much faster than HDDs.

Also, once you attack them to your laptop or PC, they take the load off these devices and free their processor. As a result, the speed of your device automatically increases.

Consequently, if you want the applications to launch faster, the websites to load without a moment’s delay, and the files to be copied at a moment’s notice, an SDD is your best bet. That doesn’t mean, however, that everything is hunky dory with the SSDs.

For, despite providing your device with an improved performance, the SSDs suffer on one count: storage space.

While you can get HDDs with several TBs of storage at a competitive cost, SSDs become astronomically expensive over 2TB.

Therefore, if you want to store large files and folders, hard disk drives are the way to go. However, if you want improved performance, faster speeds, and reduced launching times, SSDs deserve your attention.

What should I look for when choosing a Wireless Hard Drives?

You should look for the following features when choosing a wireless hard drive:

Your computer or smartphone won’t connect to two Wi-Fi networks simultaneously, right? That fact might pose a problem if you want to connect to both the wireless hard drive as well as the internet router at the same time.

Enter pass through feature. Wireless hard drives having this feature act as a bridge between your computer/smartphone/tablet and the router.

Once you have ensured the passthrough feature, check how many devices can connect to the wireless hard drive at the same time. Typically, most drives support somewhere between five and eight connections.

However, if you want your wireless hard drive to increase the performance of your device, go for SSD. Remember, when you keep storage space constant, SSDs are far more expensive.

Next up, calculate the cost per gigabyte of the device you’re looking at and compare it with other drives in the market. You can do that by dividing the total capacity in GB of the hard drive with its final cost in dollars.

For those of you who want to use their wireless hard drive as a streaming source for movies or music, look for the type of files the drive’s app supports. This aspect becomes more crucial if your collections consist of less-common formats, such as FLAC.

It goes without saying that the bigger the battery life, the more useful the hard drive is likely to be. Also, while it’s not true in all cases, but drives with a bigger chassis tend to have bigger batteries with greater battery timing.

What is the best Wireless Hard Drive? Why is it the best?

Also, it provides 3 TB storage space and offers 3 Gigabit Ethernet ports, using which you can physically connect the drive to your PC if you don’t want to do the same wirelessly.

The price range of wireless hard drives ranges between £59 and £340.

Which is the best longest lasting hard drive?

The SanDisk Connect Wireless is the best longest lasting hard drive. For, it comes with a one-year warranty, provides slots for both USB and SD cards, has a robust mobile app, and provides up to 8 hours on one full charge.